Negative SEO is an undertaking whereby a business competitor attempts to harm the search ranking position of a competing website through the procurement of junk and spam links. Our study shows that Negative SEO is very real, and can be accomplished for very little money.

Use This Graphic for FREE on Your Site!

You may use the infographic above on your website, however, the license we grant to you requires that you properly and correctly attribute the work to us with a link back to our website by using the following embed code.

About the Study: The Details

After the webmaster warnings of March 2012 and the Penguin update of April, like many in the SEO community, we wondered if negative SEO (NSEO) was now a possibility. For years Google had abided by the principle that nothing external to a site could harm it directly, ensuring that sites would be safe from the malice of competitors. Evidence for NSEO had been initially unreliable and anecdotal, so we decided to try it ourselves.

For ethical reasons we didn’t use a competitor’s site, but chose an internal property, Pool-Cleaning-Houston.com, for the experiment. This site ranked well for its domain name keyword match and a number of lesser terms, and has enjoyed a stable position in its market for years. This site because it is the SEO equivalent of the proverbial “Los Angeles dog walker.” It is not a particularly powerful site, but it is positioned in a market where it could easily provide a small business owner with a comfortable living.

We chose the following negative SEO techniques for our study:

The initial purchase of 45,000 comment links was a disappointment. The seller of the service had marketed the links as NSEO, but it soon became evident that few of the comments were being accepted by moderators, and even fewer were dofollow. The followup purchase of 7000 forum profile links seemed more promising. This was not billed as NSEO, but as a positive, albeit black hat, Scrapebox service. Then a week went by and our site failed to be destroyed.

We had built a relationship with the webmaster of the trashy blogs when we asked him to remove the sidebar links he had sent to one of our clients. He removed the links for a fee, and when we asked, he put on new links to Pool-Cleaning-Houston.com for a similar fee. Within a few days the links delivered a killing blow.

The bulk of the traffic for the site comes from the search “Pool Cleaning Houston.” For a week after the blast of thousands of NSEO links, the ranking actually went up from position #3 to #2. Then we followed up with the blog sidebar links. By the next day Pool-Cleaning-Houston.com was off the front page and essentially invisible to potential customers.

Besides the primary keyword, there were another 51 minor keywords tracked during the study. 26 went down noticeably, 21 stayed the same throughout, and 5 keywords improved slightly. Taken on average, the keywords dropped about 2.5 spots (among the keywords that did drop, the average decline was closer to 9 positions).

The total rankings of all the keywords clearly shows the effects of NSEO not just on selected searches, but on the overall ranking power of the site. For a period of three days following each NSEO burst the site improved slightly in the SERPs, and then abruptly lost the ground it had gained and then some.

It is now cheap and effective to destroy the livelihood of a small business. In a local market it could cost as little as $20 a month to knock a competitor off the first page of search returns. This low cost makes NSEO accessible to virtually anyone, from unscrupulous companies, to disgruntled employees, spiteful customers, or even idle pranksters. It’s too early to make a definitive claim about the exact causes of the Google algorithm penalty, but an effective NSEO campaign may include the creation of a backlinks profile with artificially repetitive anchor text, as well as links from a bad neighborhood.

Want an Infographic for Your Site?

Check out our Infographic Development services and see what TastyPlacement can do for you! 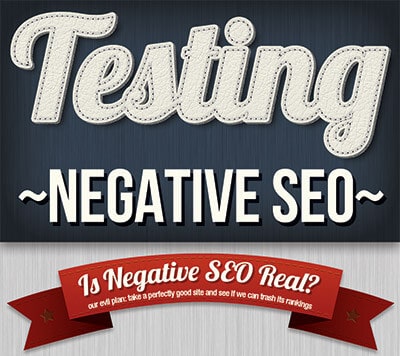 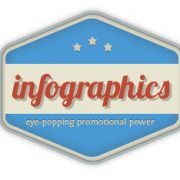 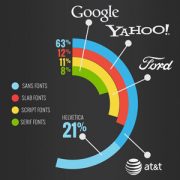 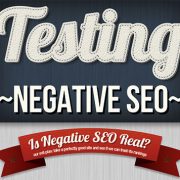 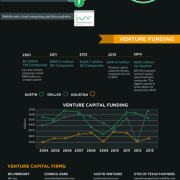 Infographic: A Guide to Startup Scene in Austin, Texas

How to Promote an Infographic
36 replies