The Magazine Industry Gets Desperate With Pro-Print Ad Campaign

One of the most notable print ad campaigns of the late summer and fall (and they are sticking to it through early winter, apparently) promotes, well, print ad campaigns. A consortium of magazine publishers including Conde Nast, Hearst, Merideth, Time, and Wenner Media launched their “power of print” campaign in order to shore up eroding confidence in magazines as an advertising medium. The campaign makes no apologies for being reactive to competition from internet-based advertising. One headline whines, “Will the Internet kill magazines? Did instant coffee kill coffee?” 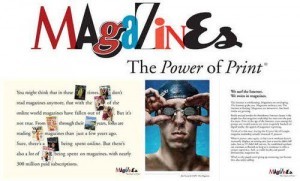 The desperation doesn’t end there. The campaign’s website pleads, “We hope to dispel many commonly held myths about the state of our industry.” And despite pro-print, blog-based cheerleading (obviously paid commentary) from old school advertising agencies like Bailey Gardner, the weakness of the underlying facts is inescapable. The real facts are that big-money, national branding campaigns as an advertising strategy have given way to the less expensive, action-based advertising offered by pay-per-click, search placement, and social media.

How to Diagnose a Google Penalty